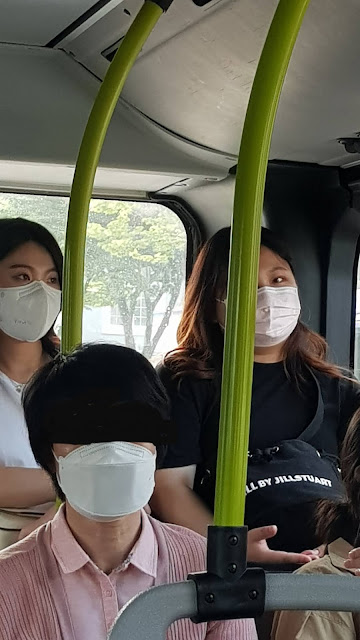 After living here for several years, there is one thing I can honestly say. Korea will change you for the worse, if you let it. I'm an assertive person but only when needed. I avoid conflict unless you start disrespecting me then the issue will be addressed directly.

The city buses in our area are almost always packed during rush hour. Even the handicapped seats are taken. These seats are usually taken by healthy young men who play with their phones and avoid the glares from the old people standing above them.  I sit in those seats but easily get up for old people and pregnant women, even women with young kids. I was sitting in a mostly filled up bus on the ride home last night, in one of the handicapped seats.

A few stops later, two young Korean women in their twenties get on. One has on a loose, black dress with a tied wrap in the front side of the dress. She is chubby so I can't tell if she is pregnant or just overweight with a big belly. Both of them stand right above my seat and are chatting right above my head. I go back and forth with myself, is she pregnant or chubby? If I ask her to sit down, will it be an insult since she might just be overweight? (Not being skinny is a crime in South Korea.) After five minutes, I still can't decide so I just stay in my seat.

Well, then the young lady in the black dress moves up two feet towards the front of the bus and fiddles with her phone. There is no loud SNAP for a picture but my gut tells me that she just took a picture of me, sitting in the handicapped seat. After she fiddles with her phone for about 30 seconds, she then moves back to stand next to her friend, right above me. She says something to her friend like, I got it.

Now, let me tell you how it is when you do NOT speak a language in a foreign country. You have to rely on observing body language and social gestures to decipher information. You become pretty good at it.

Watching her body language and observing the interaction between the two women told me that she was upset that I was in the handicap seat and did not give up my seat to her. But....she did not exactly look pregnant, she looked chubby. Even her face was round and soft.

A few people got off  and the two women moved and sat down in the back of the bus. My mind was racing with angry thoughts. How dare she take a picture of me without my permission. What about the other people who were seated in the handicap seats? Where were their silent sneaked pictures? Usually after a negative interaction with a local, I would be upset for a few days, going over and over in my mind what I could have done differently in the moment to confront the person.

Well this time, I had plenty of time to make up my mind. I decided to take a picture of HER, tit for tat. My anxiety was telling me to change my mind but I said NOPE. NOT. THIS. TIME.

Tired of these mfs getting away with the bullshit.

This country will force you to push back.

I got up two stops before my stop, held onto the backdoor's post, slowly put up my camera, zoomed in on the faces of the seated women and took a picture. Then I took another one. Then I slowly took another one.

After I took the three pictures, I slowly put my phone down and made direct eye contact with them, stone face, no blinking. The women first looked shocked then looked away, avoiding my eyes. When the back door opened, I walked off slowly, turned around and continued the steady eye contact with them through the window of the bus, stone face, no blinking. I stood still at the bus stop and kept the stone faced gaze while the bus rolled away.

See? Now we both have pictures of each other. How does it feel? If I feel bad so will you, b@tch. Let's feel bad together, friend. Posted by Sankofa Wilson at 6:33 PM