Here are some beautiful sunsets I have captured while staying here in So Ko.
It is amazing to see God's masterpieces. 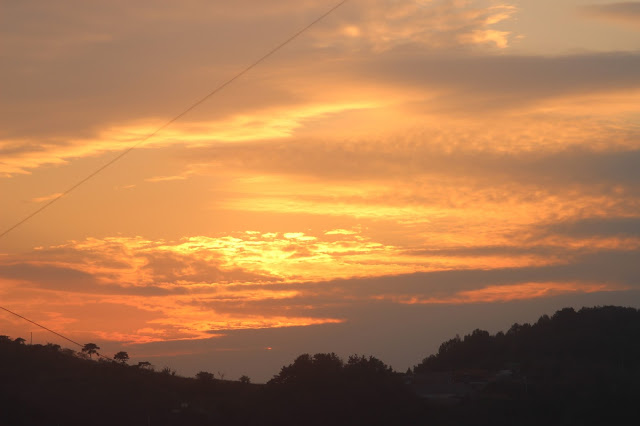 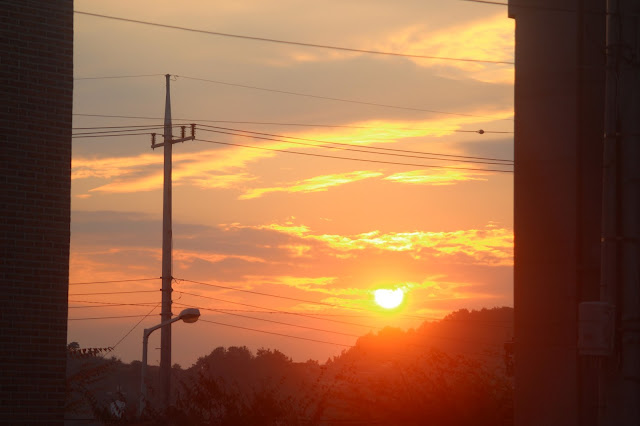 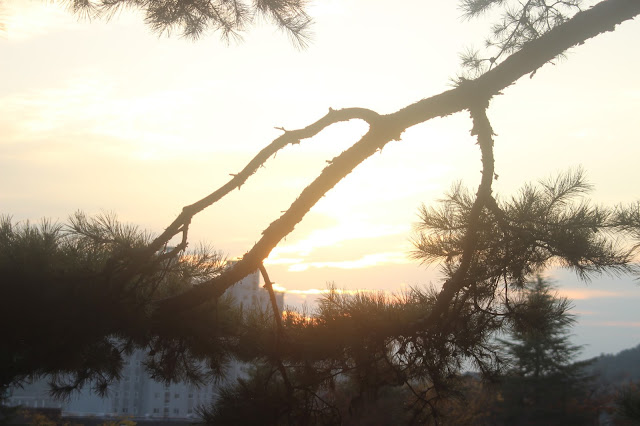 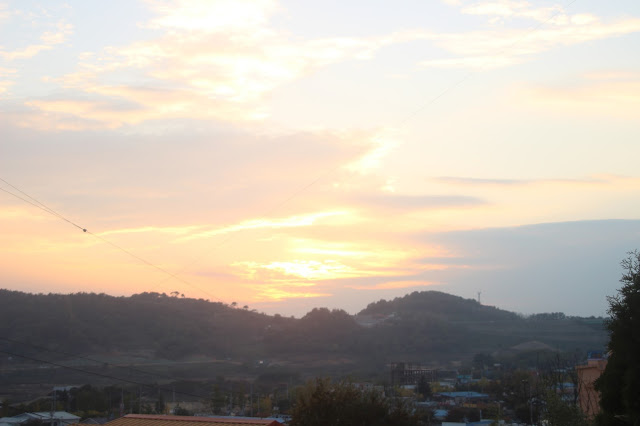 Posted by Sankofa Wilson at 1:09 AM No comments:


My friend Julie invited us to visit a jimjilbang (Korean family-oriented sauna) with her english club this past weekend.
It was a really unique experience.  We went to the front desk and the woman checked us in. She looked at me and looked like she was trying to figure out if they had any sauna outfits for giants. Eventually she found one that was a "free" size for me.  Then she gave each of us keys and we placed our shoes into lockers.  We then went to another locker room and used the same key to put away all our street clothes and changed into the sauna outfits. Julie and the club members had  bought food and booked a private room. While we were changing into our sauna outfits, there were a bunch of naked Korean women and girls walking around.

I only like to see family naked not strangers.

After changing, we went upstairs to the larger community area. There were people lounging around, watching tv or just talking quietly with their family members.

Thank God they were not naked!

As we walked across the large floor area, we received a lot of whispers and stares. They were surprised to see a white and Black woman there. For most of them, it was their first time seeing someone of another race.
Once we were in the private room, we had a very nice time. We ate and socialized with the other english club members and  enjoyed ourselves.

About an hour after we got there, the members suggested we go into the hot sauna rooms.
There were two rooms. One that had a temperature of  75 c and the other was 120 c.
We wanted to start off low so we went to the "cool" room.
There were hot rocks on the floor and you had to walk across the hot rocks in order to get to a corner where you sat on small wooden clogs and basically just sat there while the heat made you sweat all of the toxins out of your body.

We were able to sit there for 30 minutes and felt very proud of ourselves....until there was a loud sound!
A large barge of hot metal coal was slid very slowly into the middle of the room and it increased the temperature IMMEDIATELY.  I honestly felt like we were being barbequed. We were unknowingly slabs of ribs and next they would ask us to lather our bodies with a tangy, barbecue-flavored lotion.

After we left that room, we went to wash off the sweat at the public showers.
My friend and I were the only foreigners in the entire sauna.
We huddled our naked bodies under one water sprout, sharing the same soap and encouraging each other to lather and rinse FASTER! The Korean women were fascinated by our pink and brown naked bodies. And we were fascinated by much closer you feel to your friend after you have seen her naked in a public shower after being goggled by about 25 Korean women.

Finally we got finished, got dressed and finished chatting with the english club.
We caught a ride home and will have a story to tell about how admired we were once in a public bathroom.

This is what the other women were doing in the shower, lol.

Posted by Sankofa Wilson at 4:45 AM No comments:

Last Tuesday, after school, I met up with my friend J to make leek pancakes with the four students she tutors.  We each took turn making the vegetable pancakes and then enjoyed eating them.
Mine was too thick but they were polite and ate it anyway.
Thanks, boys!

Posted by Sankofa Wilson at 4:40 AM No comments:

You are beneath me. Please do NOT speak.

Today my coteacher sat me down and explained to me that our new Vice Principal does not want teachers of different levels socializing with each other during school hours. This includes all of the staff: "real" teachers vs contract teachers vs after-school teachers vs special education teachers vs cafeteria and maintenance staff. School hours include free time, lunch hour and teacher breaks.
He roams the school building during the day to catch someone doing something he considers "wrong" and then will punish/penalize them with intense scrutiny/demerits.

For the life of me, I cannot understand WHY WHY WHY?

All of the Korean teachers are stressed.
Now I can no longer spend my 10:30 break with the very nice maintenance lady eating fruit and listening to her have a full conversation with me in Hangul.
I also can no longer speak (during school hours) with my friend Julie, who is also sweet and who speaks English very well. Those simple moments alleviated the feelings of isolation and loneliness that I feel during the school day.

I do not believe this is due entirely to culture. I think he may have a difficult, nit-picking personality and gets to happily wield his power at his job to our detriment.

Posted by Sankofa Wilson at 3:04 AM No comments:

Breaking and Entering is a crime isn't it?

I have been moved into a new office that faces the sun. YAY!!
No more zero degree temperatures while desk-warming.  My new office is a smaller room that is inside of the school's main computer room. I have not been given a key because of the high value of the contents in the computer room. So... every morning I use my pink scissors to open the door to get into the computer room and then enter my office. I also have to leave at whatever time the computer teacher leaves and stand in the hallway until 5pm.

Am I the only one who thinks this is foolishness?


Posted by Sankofa Wilson at 5:06 PM No comments:

Every since I have come back from vacation last week, I've lost all interest in my adopted country.
Nothing interest me anymore. Not the upcoming cherry blossoms. Not the new semester full of fresh-faced eager students ready to ask to touch my hair and skin.
Nothing.
NADA.

I know it is a combination of factors. The majority of our orientation class will be completing their contract next month and bouncing out of here, HAPPILY. They are looking forward to either returning home or continuing their travels to another foreign country.
Having to say good-bye is daunting and draining.  Also the thought of being in this country for the next 13 months is depressing. I will have to make new friends and create a new network in order not to feel isolated. This is when I wished I could join the "drinking crowd". It would be so easy to just drink away my loneliness. Since I do not drink, I will have to pacify myself with chocolate and ice cream.
NOT THE SAME THING DUDE!!!

I have to get my mojo back! OK I will start taking pictures again. I love photography and taking pictures during the springtime will lift my spirits.
(And, per the picture below, makes me look years younger! LOL.) 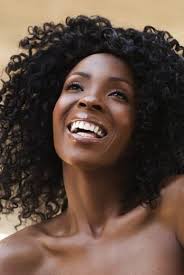 Posted by Sankofa Wilson at 2:30 AM No comments:

My coworkers murdered my plant

So I asked the staff in the administrative office to keep my spider plant when I was leaving for vacation. How the hell was I suppose to know they resented me for being able to go on a 5 week vacation out of the country, when they are barely allowed a straight, week-long vacation?

I came back from vacation and went to pick-up my plant.
They told me it had died. I slowly looked around at the other nine healthy, vibrant plants in their office. The other plants were practically shimmering with life and healthiness. There was so much oxygen in that room, we could have cloned a new plant for me.


My spider plant was the picture of health when I dropped it off for plant-sitting.

This is probably how it looked right before it jumped.

Posted by Sankofa Wilson at 8:56 PM No comments:

Singin'...and dancin' in the rain

First the thunder came. Then dark clouds and raindrops. Slowly at first. Then more and more until it was a hard and fast rainstorm in the middle of the day.

I COULD NOT resist.

I ran outside, spread my arms wide, lifted my face to the skies and....danced!
I twirled, wiggled and dance in circles.
I felt the grass between my toes, the raindrops on my skin and felt so close to God.
With my face to heaven, raindrops falling on every part of my body, I thanked God for life, family and love. Life is so amazing and we are given family and love to share it with.

I felt soooooo blessed and happy.
Life is beautiful. Don't you agree? 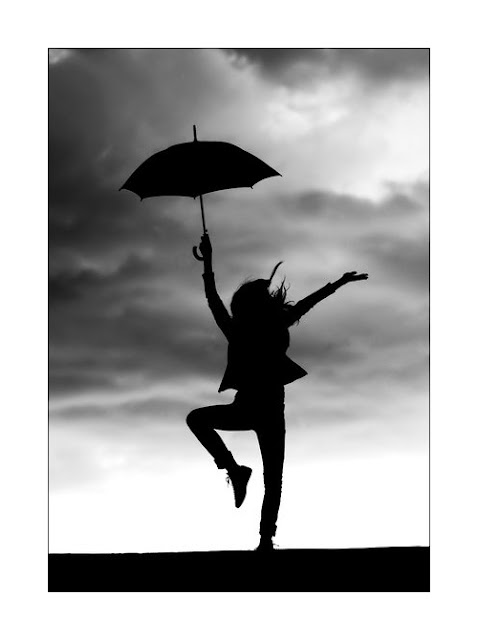 Posted by Sankofa Wilson at 6:37 PM No comments:

4 best parts of my vacay

The 4 best parts of my vacation were:

1) Fresh fruit in my own backyard. We made all-natural smoothies and loved it!
(fresh papaya, orange, mango, noni, coconut)

2) The wonderful scent of clothes dried on the clothesline, kissed by the sun. Mmmmmmm!

3) Seeing farmlife everywhere. I saw cows, goats, chickens, sheep and pigs just walking around us,    doing their everyday activities while we did ours around the town.

4) Positive images of Africans on tv. It was wonderful to see African newscasters, weathermen, actors and actresses on television. The majority of images seen in Asia are negative and needy.

5) LOVE. Being surrounded by family and love for an extended period of time. It helped me to be strong again and to be able to come back and complete another year away from home. 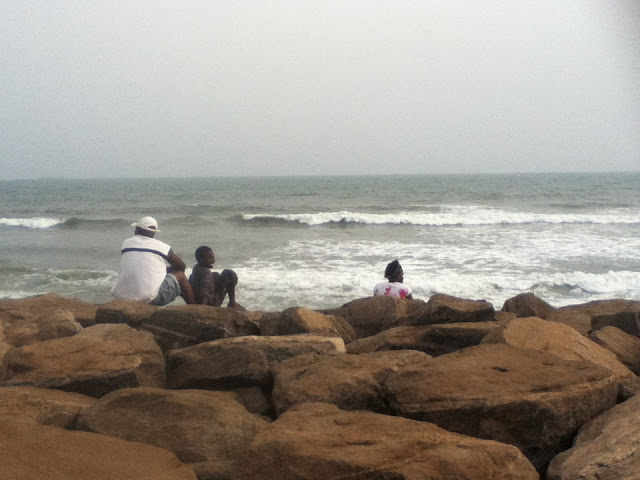 Posted by Sankofa Wilson at 6:37 PM No comments: